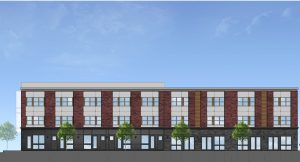 This new development will face Market Street, between Robinson and Dewey Streets, on the 6100 block of Market.  There are ten parcels, currently with several vacant and dilapidated buildings. Four of the buildings will be renovated and five new buildings will be built, three facing Market Street and one each on Robinson and Dewey Streets.  Each Market Street building will have three rental units, and the two side street buildings will be single family homes. Commercial retail spaces will be on the first and lower floors on Market Street. In all, the development will have 31 residential units, including the two single family homes, and 4,400 square feet of commercial retail space.  There will be some open space behind the Market Street buildings and green roofs on top. Because of the site’s proximity to the 60th and 63rd Street El stations, there is no parking but there will be bicycle storage. The exteriors will have black brick on the lower level and red brick above, with modern, metal panel bays replacing the original bays, and a new cornice.

The 60th Street corridor is steadily improving. At the intersection of 60th and Market, a new commercial and residential development is being built by Achievability, older commercial buildings are being renovated along 60th and Market Streets, a landmark apartment building was renovated on 59th Street, and an old movie theatre is being converted into a community center at 60th and Locust Streets.  But, the new development at 6117 Market Street brings the corridor into a new era of private development.

The data relating to real estate for sale on this website appears in part through the BRIGHT Internet Data Exchange program, a voluntary cooperative exchange of property listing data between licensed real estate brokerage firms in which The Condo Shop participates, and is provided by BRIGHT through a licensing agreement. The information provided by this website is for the personal, non-commercial use of consumers and may not be used for any purpose other than to identify prospective properties consumers may be interested in purchasing. Real estate listings held by brokerage firms other than The Condo Shop are marked with the IDX icon and detailed information about each listing includes the name of the listing broker.
2020 BRIGHT, All Rights Reserved. Information Deemed Reliable But Not Guaranteed. Some properties which appear for sale on this website may no longer be available because they are under contract, have Closed or are no longer being offered for sale.
Data last updated: 1/23/20 4:00 PM PST