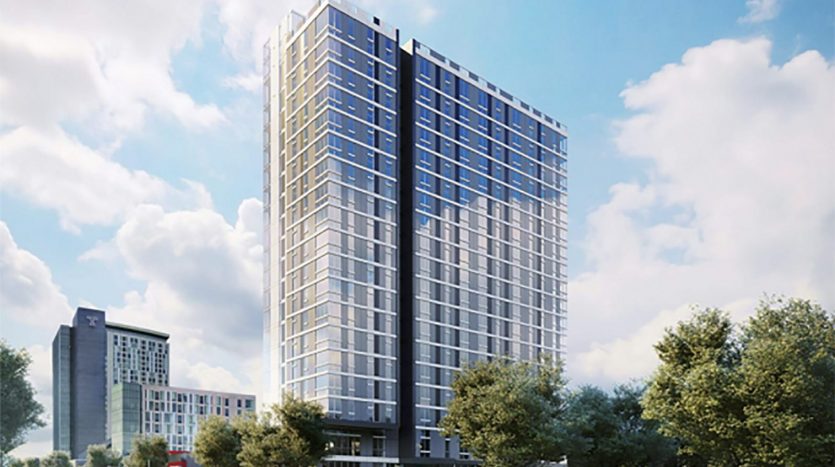 North Broad Street is seeing a boom of new construction, including housing, retail, and entertainment.  The developments are getting larger and are starting to include high-rise buildings. Much of the new development is being built by private developers, who are building market rate housing now between City Hall and Temple University.  A new high-rise apartment building is planned by a private developer at Broad and Jefferson Streets, replacing a vacant modern church. This new high-rise is being designed by Cecil Baker Architects.

The new apartment building at 1451 North Broad Street will have 225 rental apartment units.  The units will be studios, one-bedroom units, and two-bedroom units. It will be nineteen stories, and 206 feet, tall and be shaped like an “L”.  The first floor will have a 5,000 square foot retail space at the corner of Broad and Jefferson and a fitness center facing Broad Street. The residential lobby will be accessible by an entrance set back from Broad Street, at the end of a long path next to a courtyard garden with flowering trees.  The second floor will have several amenities, including a fireplace lounge, study rooms, a small technology center, and a terrace overlooking Broad and Jefferson, above the retail space. The exterior will have metal panels and large windows, with some indentations and small setbacks. The first floor will have brick and masonry.  The building will have 21 parking spaces on a surface lot next door.