Drexel University is partnering with 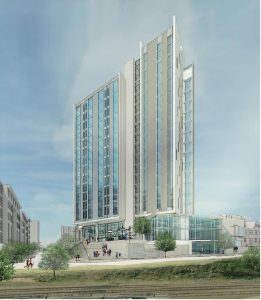 Radnor Property Group to build a highrise market-rate apartment building on the edge of their campus at 32nd & Race Streets.  The new apartment tower will have 164 units, but undergraduate student residents will be prohibited from living there.  This tower will be intended for workers in University City and Center City, and some graduate students, much like similar University City apartment towers at 3601 Market Street and 3737 Chestnut Street.  This tower is on land owned by Drexel and it is being designed by Erdy McHenry Architects.  It will be 14 stories, and almost 200 feet tall, and it will have incredible views of the Center City and University City skylines.

The tower will be built over a base of parking, with a raised plaza just above 32nd Street, which will also have a great view of the Center City skyline.  The first floor will be largely taken up by a 14,000 square foot childcare center.  The site is currently zoned CMX3, which allows for such large mixed-use towers.  There will, also, be a dozen owner occupied townhouses on Summer Street, at the request of the Powelton Village residents.  That site is zoned RSA5.

The façade of the tower will have large glass panels on the side facing Center City in order to maximize the view of the city skyline.  The rest of the façade will have paneling.  The designers have included many sustainable features, including a bio-retention pond and a large play space for the children, in order to mitigate storm water runoff.  A large community garden, to the west and extending to 33rd Street, will be retained.

Philly Makes the Top Ten List for First-time Homebuyers
New West Philly Residential Building at Clark Park, Makes the Most of Its Site