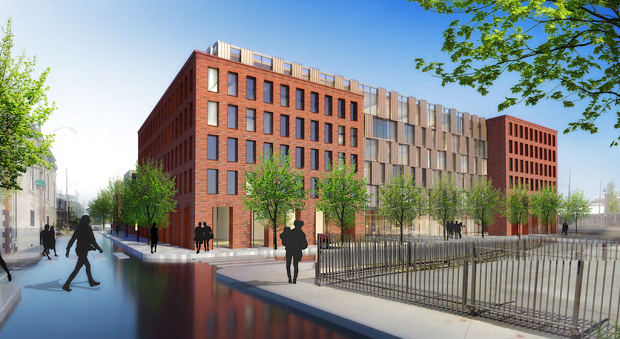 South Kensington continues its dramatic redevelopment as vacant lots and small industrial buildings are replaced with apartment and commercial buildings, and some new townhouses, while other vacant industrial buildings are renovated into residential and commercial space.  South Kensington had an enormous amount of vacant land and buildings that made it attractive to developers looking for new properties to develop near Northern Liberties and Fishtown, with easy rail and bus access to Center City and even University City. As South Kensington continues to grow at a rapid pace not seen in the neighborhood since the nineteenth century, most of the large vacant parcels of land have been bought by various developers and projects are already under construction or are finishing up.  There are a few large vacant properties left, and one of those is at 175 West Oxford Street, at the busy intersection of Second and Oxford Streets. This property has one two-story vacant warehouse, which most recently had a novelty shop on the first floor, and the rest of the property between Second, Oxford, Hancock, and Turner Streets is completely vacant. This property has been bought by developers Northern Star and Ampere Property Group to be developed into a mixed-use project of apartments, townhouses, and commercial space that will incorporate the small warehouse.  This new development is being designed by Sitio Architecture and will be called Oxford Court.

Oxford Court will consist of three sections.  One section will be a large six-story, two-wing apartment building with 144 rental units.  This building will have two red-brick sections connected by a thinner section covered in metal panels, some with a wood color, to create an industrial-style look.  The sixth floor will be set back and covered in the same metal panels. The roof will have an extensive green roof and an amenity deck at the corner of Oxford and Hancock Streets on the sixth floor level.  The first floor will have a retail or artisan industrial space facing Hancock Street, and 31 parking spaces partly along a walkway down the middle of the property where Palethorp Street was. The entrance and lobby of the apartment building will be along Oxford Street.  The building will, also, be set back from Hancock Street enough to create a small plaza. Another section will have fifteen townhouses at the corner of Second and Oxford Streets. Eight of the townhouses will face Second Street and the other seven townhouses will face the walkway where Palethorp Street used to be.  The townhouses will have red brick facades and set back fourth floors, which will have terraces and metal panels on the exteriors. The townhouses will have parking spaces accessible from Oxford Street. The third section of this development is the small warehouse, which will have two additional floors added to make it a four-story building.  This building will be renovated into a large retail building, possibly with a grocery store and a roof deck for the customers of that store, and possibly, for community events. That concrete building will be painted a new color and will have new industrial-style windows installed to replace the former windows. A canopy will be over the first floor exterior of that section.  New trees will be planted on all the surrounding sidewalks, and on the new walkway in the middle of the project, and a small garden for residents will be planted on Oxford Street next to one of the townhouses. The developers are planning to have ten percent of the housing units be affordable units.

Oxford Court will fit in nicely with the large amount of new development in the very prolific South Kensington neighborhood.  Oxford Street itself is experiencing several of these new developments, as are Berks Street, Montgomery Avenue, and Cecil B. Moore Avenue.  These major streets used to have much vacancy, but are starting to become vibrant again with apartments, retail, and artisan industrial space.  Oxford Court is one of the mixed-use developments in South Kensington which provides apartments, townhouses, retail, artisan industrial space, and some open space.  As these developments keep getting built, South Kensington is rapidly becoming one of the most vibrant neighborhoods just north of Center City.

The data relating to real estate for sale on this website appears in part through the BRIGHT Internet Data Exchange program, a voluntary cooperative exchange of property listing data between licensed real estate brokerage firms in which The Condo Shop participates, and is provided by BRIGHT through a licensing agreement. The information provided by this website is for the personal, non-commercial use of consumers and may not be used for any purpose other than to identify prospective properties consumers may be interested in purchasing. Real estate listings held by brokerage firms other than The Condo Shop are marked with the IDX icon and detailed information about each listing includes the name of the listing broker.
2020 BRIGHT, All Rights Reserved. Information Deemed Reliable But Not Guaranteed. Some properties which appear for sale on this website may no longer be available because they are under contract, have Closed or are no longer being offered for sale.
Data last updated: 4/9/20 11:33 PM PDT