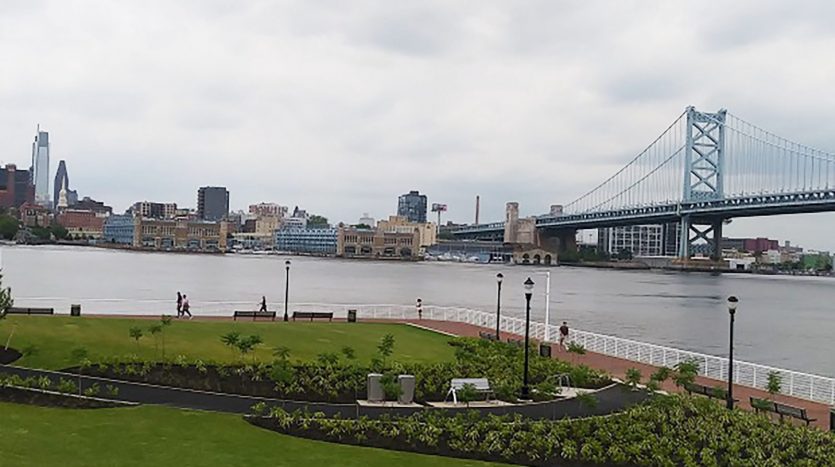 The Camden waterfront is experiencing much new development in recent years.  New office buildings have recently been built, including one for the headquarters of American Water, and a new apartment building called One Cooper Street is under construction across the street from The Victor apartments, in the former RCA Victor factory building.  The RCA Victor factory was once part of a much larger manufacturing complex, where most early phonographs and most records of the 1920s and 1930s were manufactured. As time went by, the amount of manufacturing which occurred at the complex declined and the RCA buildings were left vacant.  One of the largest buildings stood south of The Victor building and extended onto a pier on the waterfront. That pier once had a coal yard that jutted out into the Delaware River and then held the large building, which was imploded in 1997. The pier was recently used as a parking lot, just like the rest of the site until the recent office and apartment development, except for a brick walkway on the edge of the former RCA Pier and waterfront.  The City of Camden has recently taken ownership of the pier and have completed a beautiful new park called RCA Pier Park, which had an official ribbon cutting ceremony on May 30.

This new park replaces the parking lot on the entirety of the two-acre pier with a green oasis for busy office workers, residents, and visitors to Camden waterfront attractions like the Adventure Aquarium, Camden Children’s Garden, and the B & T Pavilion entertainment center.  The park has several winding paths, benches, bike racks, lighting, and thousands of new plants and trees. The trees include elms, locusts, evergreens, alanthuses, and maples. A hill with incredible views of the Center City skyline, the Ben Franklin Bridge, the Delaware River, and Camden’s growing waterfront skyline is in the middle of the park.  The park was built with $4 million provided by the State of New Jersey and Liberty Property Trust, builders of the adjacent office buildings. The William Penn Foundation is providing money for regular programs, such as concerts, games, yoga classes, and other fitness events, organized by Camden’s Connect the Lots initiative. The park will have some further features in the near future, including new artwork, signage, free wifi internet, and additional plantings, also paid for by the William Penn Foundation.