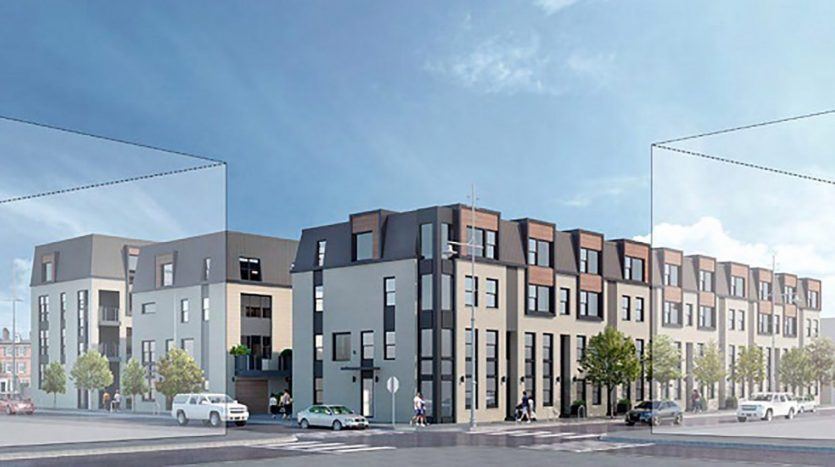 The new development will have three sections of housing.  Two sections will have a combined total of 22 townhouses and a section of condominiums in duplexes and corner multi-family buildings will have 22 condo units.  The northernmost section will be on Carpenter Street and will be a row of townhouses with garages on the south side. The middle section will be separated from the section on Carpenter Street by a drive aisle.  The middle section will also be townhouses with garages facing north. The townhouses will all be four story buildings with brick facades and a metal mansard roof, as well as, composite wood panels. The southernmost section will have ten duplex units and two buildings with six units each on the end of that section.  The middle section and southern section will be separated by a landscaped plaza, with permeable pavers, planters, and benches. A walkway will surround the perimeter of the development. Ten percent of the condo units will be designated as affordable. The units on 16th Street will have doors and small stoops on the sidewalk.  Bike racks will be located on 16th and Carpenter Streets.

South Philadelphia has been experiencing much new development near Center City.  The Washington Avenue corridor will continue to see a mix of new apartment buildings and some new retail spaces.  Some of the small shopping centers and warehouses on the street will likely be bought up and replaced with this kind of development.  Already, an apartment building is proposed for the parking lot at 16th and Washington, next to this new development by Streamline. The redevelopment of formerly industrial sites around Broad and Washington will continue for some time.