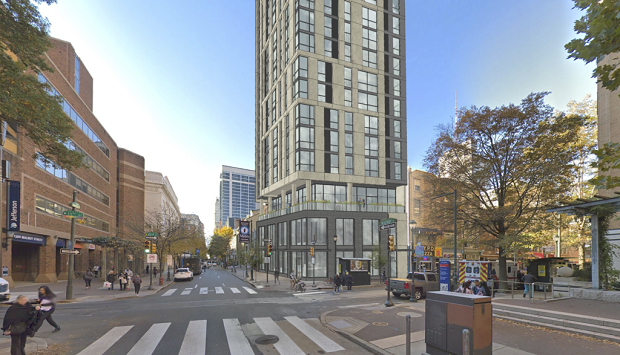 Washington Square West is a neighborhood in the middle of Center City, just west of Washington Square Park and the very historic Society Hill.  The neighborhood has several theaters, plenty of stores and restaurants, and Thomas Jefferson University. For decades, a one-story Wendy’s restaurant was located at the northwestern corner of 11th and Walnut Streets, across the street from a couple dormitories for Thomas Jefferson University and the Forrest Theatre.  That restaurant has closed and the one-story building at 1101 Walnut Street, and a neighboring three-story building at 1105 Walnut Street, are about to be demolished and replaced with a new residential tower. This new tower will be extended stay apartments by Sonder. It is being developed by ARD and designed by JKRP Architects.

The new tower at 1101 Walnut Street will have 111 units in a 23-story building.  The developers may increase the number of floors to 26 stories, though. The units will be small extended stay units, but depending on the market may become year-to-year units later.  The first floor will be a retail space, likely for a bank, and the second floor could have a salon, a spa, or a fitness center. The third floor will have an amenity space for the residents.  The exterior will have brick at the lower floors, glass and a setback at the third floor amenity space, and metal panels and precast concrete with floor-to-ceiling windows for the residences above.  There will be a bicycle room in the building and 34 off-site parking spaces nearby. Three new street trees will be planted outside.

These new highrises are becoming commonplace in Washington Square West.  Next door to this new tower, a smaller highrise micro-hotel is planned and a new apartment building for seniors is planned on 12th Street, across Sansom Street.  Up the street, the East Market development is bringing four new residential highrises between Market, Chestnut, 11th, and 12th Streets. A few blocks to the east, at least three new luxury residential highrises are being built and on Broad Street, a very tall new luxury condo tower is being built at Spruce Street, with another one planned for Pine Street a block away.  The new highrise at 1101 Walnut Street will be yet another in a long series of highrises transforming an already popular and upscale neighborhood in Center City.

The data relating to real estate for sale on this website appears in part through the BRIGHT Internet Data Exchange program, a voluntary cooperative exchange of property listing data between licensed real estate brokerage firms in which The Condo Shop participates, and is provided by BRIGHT through a licensing agreement. The information provided by this website is for the personal, non-commercial use of consumers and may not be used for any purpose other than to identify prospective properties consumers may be interested in purchasing. Real estate listings held by brokerage firms other than The Condo Shop are marked with the IDX icon and detailed information about each listing includes the name of the listing broker.
2020 BRIGHT, All Rights Reserved. Information Deemed Reliable But Not Guaranteed. Some properties which appear for sale on this website may no longer be available because they are under contract, have Closed or are no longer being offered for sale.
Data last updated: 12/2/20 4:55 AM PST