New West Philly Residential Building at Clark Park, Makes the Most of Its Site 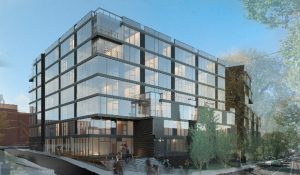 A new apartment and condominium building is about to be built at 43rd Street and Baltimore Avenue, across the street from lovely Clark Park, in West Philadelphia.  The Planning Commission’s Civic Design Review committee heard details of the proposal on April 7. The new building is being developed by U3 Ventures and designed by Cecil Baker and Partners, with landscape design by Studio Bryan Haynes.  The design was influenced by several community meetings held in 2013, in which there was much input from local residents.

In the meetings, residents stressed the need to make the most of this very important neighborhood site.  The site is currently a large vacant lot along busy Baltimore Avenue.  The neighbors want to use the site to have more retail for the community.  The local residents, also, wanted to have a mix of apartments and condos and to have a design of the units such that students will be less likely to live there.  Also, the residents wanted to see a café or restaurant with outdoor seating facing Clark Park and to save certain trees along the sidewalk.

The architects decided to split the building into two wings.  The one further away from the park will be taller, with eight stories, and will have many of the condos.  That wing will have underground parking, since the site has a fairly steep grade.  It would, also, have a gym open to the public and accessible on Baltimore Avenue.  The wing facing the park will be five stories tall and would have retail on the first floor and a green roof.  There will be a “porch” on 43rd Street, facing Clark Park, where there would be room for outdoor seating for a possible restaurant or café.  In between the wings will be the front entrance.  The lobby will lead to a courtyard in the back with more parking and landscaping.  The wing facing Clark Park will be angled a bit to allow views of the park from Baltimore Avenue and so the developers could save certain street trees on Baltimore Avenue.  The façade of the building will have large windows and brick and stone panels for a very modern design.  In all, the building will have 132 residential units, 60 parking spaces, 50 bike parking spaces, and 17,000 square feet of retail.

At the CDR meeting, most committee members and commenters from the audience supported this new project and the process that slowly led to the design.  One neighborhood resident, Mary McGettigan, objected to the building’s size and modern design, saying it clashes with the existing neighborhood buildings. The CDR committee voted to end the CDR process, so the full Planning Commission and Zoning Board can vote on the building next.  The project will need three zoning variances, for height, retail, and number of units. 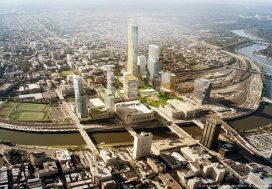