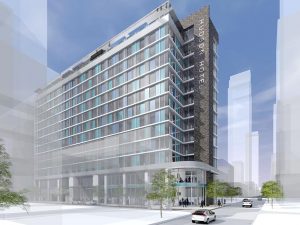 The Philadelphia City Planning Commission unanimously endorsed a Council bill, at their monthly meeting on November 18th, which would change the zoning of a parcel of land at 17th & Chancellor Streets to allow the construction of a “Hudson Hotel”.  Hudson Hotel is a boutique hotel brand originally started in New York.  The Planning Commission suggested the zoning change to CMX5, which would allow a more densely built building, when they had met with developers, Morgan Hotel Group, and contractors Clemens Construction.  The hotel would replace a three-story parking garage which has the local diner, Little Pete’s.  It is being designed by DAS Architects.

The building would be 13 stories tall and will have 310 rooms.  The first two floors will have the lobby and two levels, and 5,500 square feet, of retail space along 17th Street.  There will be a restaurant/bar on the rooftop.  Inside will be a small meeting room, community rooms, and a fitness center.  The architects created a modern design, with “transparency and lightness” to contrast the older brick buildings which surround the site.  There will be 175 parking spaces below ground, with access from Chancellor Street, and loading access on St. James Street on the building’s south side.  The developers plan to improve the streetscape of Chancellor Street, which will soon have a restaurant by restaurateur Marc Vetri across the street.  The exterior will have porcelain and glazed panels, in addition to large windows and a brick band along the 17th Street side and cornice.

The developers said that the hotel is designed for both business and leisure travelers and will use technology extensively.  It is expected to be mid-priced and should create a mix of about 400 permanent and construction jobs.  The project will have to go before the Planning Commission’s Civic Design Review committee, but would not need to go before the Zoning Board of Adjustment because of the Council bill which would change the zoning for the site.