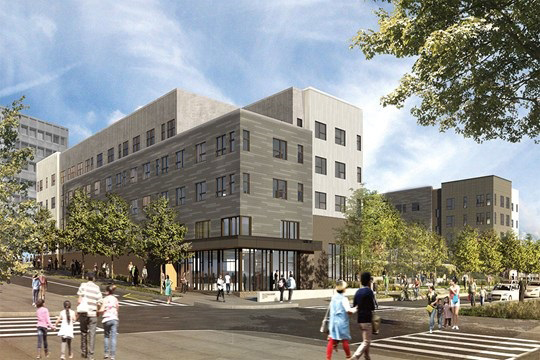 North Philadelphia has been seeing massive redevelopment over the years.  Some of the largest amount of this redevelopment has been happening around Temple University, some of it for students and some of it is affordable housing for families.  Much of this affordable housing is in the form of townhouses, some of them with small front and back yards, and some of it is in the form of modern apartment buildings. One large area of redevelopment has been on the site of the former Norris Apartments between 10th and 12th Streets and Diamond and Berks Streets.  This property had a high rise apartment building and garden apartments that have been demolished over the years in a redevelopment known as North Philadelphia Choice. It is named after a federal program that seeks to rebuild public housing around the nation, and that program contributed a $30 million grant some years ago for this redevelopment.  The new development includes townhouses and walk-up apartments where the former Norris Apartments once stood. The latest phase, known as Phase V, will include a new apartment building and townhouses. Phase V will be built by Jonathan Rose Companies and Domus Construction, and it is designed by Wallace, Roberts, & Todd Architects. The housing units will be available for tenants making 20% to 80% of Area Median Income.

The North Philadelphia Choice Phase V will have three buildings.  The largest building will be four stories and will have 117 affordable rental apartments.  The units will be studios and one-bedroom units. The apartment building will have two courtyards in front along 10th Street, one for the residents that will have a community garden; tree grove; and grills; and another courtyard with a play area for neighborhood children.  The apartment building will have a fitness center, a computer lounge, and a community room. A two-story, 2,000 square foot retail space will be on Berks Street and the residential lobby will have wood trim, including in the ceiling. The two other buildings will be at Norris and Warnock Streets and will be made up of sixteen two-story townhouse units between them.  These townhouses will have stoops and backyards. The exterior of each of the buildings will have gray brick and fibre cement. Parking will be on a surface parking lot and the apartment building will have 52 bicycle parking spaces. A rain garden will be located at the corner of 10th and Norris Streets.

North Philadelphia Choice Phase V fills in a void in the revitalizing Ludlow neighborhood.  Across 10th Street from the new buildings is the Temple University regional rail station and to the east of the train station is Paseo Verde, an apartment building built several years ago by a local community group.  To the west of Phase V is a playground and a small community center and further west is the campus of Temple University. The North Philadelphia Choice development includes not only the rebuilding of the Norris Apartments, but also several small apartment buildings east of the regional rail tracks.  North Philadelphia Choice Phase V is an important piece in the puzzle to recreating much of the Ludlow neighborhood.