Observation deck for One Liberty Place? 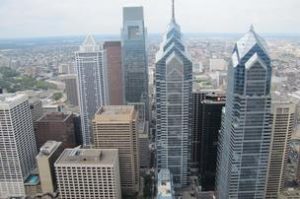 Plans are afoot to create an interior observation deck on one of the top floors of One Liberty Place.

The skyscraper at 1650 Market St. is the second tallest in Center City and the observation deck would reportedly occupy the 57th floor, according to people familiar with the situation. It would have its own dedicated elevator as well as a small cafe to dine in or hold events, they say.

The views would be pretty spectacular considering the building’s location and height. If anyone has dined at R2L2 at Two Liberty Place, they have somewhat of an idea of the type of views that can be seen from the 37th floor of that building.