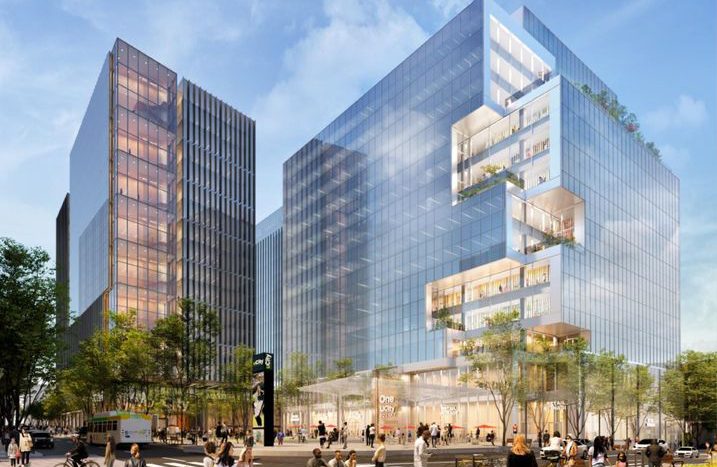 University City has been seeing much new office and research space development in recent years.  This new development is currently happening near 30th Street Station and on different blocks of Market Street.  One large site where office and research space has been proposed is at the site of the former University City High School, between 36th and 38th Streets north of Filbert Street.  This area has been planned for a large new high-tech innovation and business district, north of the University City Science Center along Market Street. Currently, a new elementary school is being built on 36th Street and a new apartment building is about to be built at the corner of the site where 38th Street, Powelton Avenue, and Lancaster Avenue meet.  The redevelopment of the former University City High School campus includes recreating 37th Street, from Market Street through to Lancaster Avenue. New office and research buildings are planned along 37th and 38th Streets. The first office and research building is planned for the block at 37th and Cuthbert Streets and will be called One UCity Square, next to a plaza called UCity Square, which will be a focal point for the new district.  This new building and plaza are being developed by Wexford Science and Technology. The building is being designed by ZGF Architects and the plaza is being designed by Andropogon.

The new building will be fourteen stories tall and will be an even mix of office space and research space above the first floor.  There will be 195,000 square feet of office space and 195,000 square feet of research space, and more than 16,000 square feet of retail space on the first floor.  There will be 149 underground parking spaces. The exterior of the building will have mostly glass, with metal trim, and a staggered facade at one corner with extensive color-changing lighting.  The staggered facade will create terraces. The building will be LEED Silver or Gold. The plaza south of the building will be called UCity Square, what the business and innovation district is the namesake of.  It will consist of an event lawn, a sculptural fountain, a “bosque” tree grove, and a structural canopy. The trees will largely be willow oaks and London plane trees. The plaza will have granite pavers and seating for the retail of the neighboring buildings.  The pedestrian exit of the garage will be in a headhouse on the plaza.

As we start a new decade, several large new developments, and redevelopments and renovations, will add greatly to Philadelphia’s economy and culture.  UCity Square is one of those immense redevelopments that will bring millions of square feet of new construction and thousands of new jobs and residents.  As the first office building built north of Market Street in this section of University City gets under way, a new elementary school is under construction across 37th Street, a new apartment building is about to break ground across Warren Street, and a new academic building for Drexel is about to be built at 36th and Filbert Streets.  Eventually, a new hotel and at least three additional office buildings will be built around the plaza known as UCity Square and this new office building known as One UCity Square. This new office and innovation district will be a major center for economic activity and development of new technology in University City and West Philadelphia in the new decade and beyond.