Piazza Terminal To Complete the Piazza in Northern Liberties 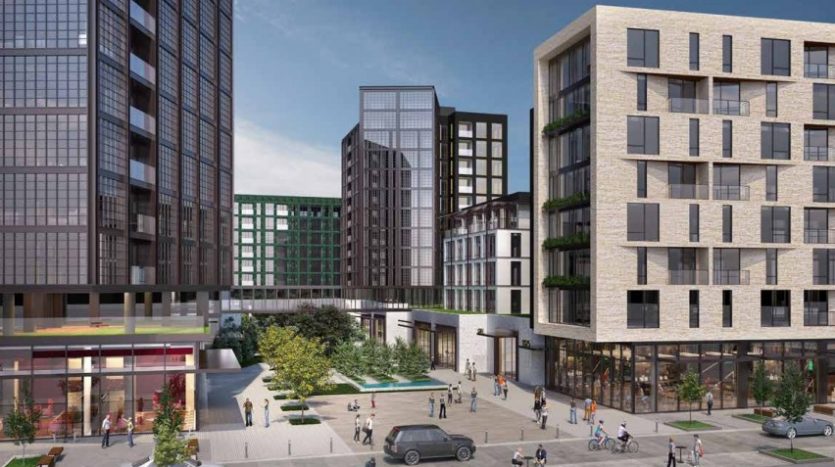 The former Schmidt’s Brewery in Northern Liberties closed more than twenty years ago and was a large vacant eyesore at Second Street, Girard Avenue, and Germantown Avenue. It was demolished about fifteen years ago and part of it was replaced with Tower Investment’s large Piazza development of apartments, stores, restaurants, and an oval-shaped office building surrounding a public plaza. A large section remained vacant east of Germantown Avenue, between the apartments and the parking garage and supermarket on Girard Avenue. Developing this site would complete The Piazza development as previously planned. Tower Investment is planning to build the last phase of The Piazza in coming years. This last phase is being be designed by BKV Group and will be called Piazza Terminal.

Piazza Terminal will have several large and highrise buildings surrounding another public plaza called Germantown Plaza. The tallest buildings will be twelve stories and 130 feet tall. The buildings will have nearly 1,200 rental apartments, and some townhouses, and 47,000 square feet of retail space. The plaza will have a mix of paving stones and grass lawns, some of it with undulating “waves”, and different “outdoor rooms” with spaces for events, performances, and farmers markets. There will be a sculptural play structure, a small wooded area, and space for tables in front of the retail spaces. The parking deck will have 509 parking spaces and amenities above, including an indoor lounge and outdoor amenities with three different pools, an outdoor kitchen and dining area, cabanas, a yoga lawn, and hot tubs. Some of the buildings will have green roofs. There will be a bridge over Germantown Plaza connecting the buildings on either side.