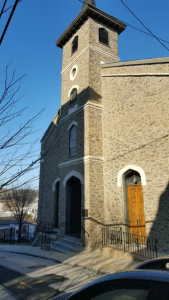 Manayunk is a Northwest Philadelphia neighborhood with steep hills, old mills, working class rowhomes, and a busy waterfront and Main Street, literally.  St. Mary’s Church is a complex of vacant buildings and parking lots along Conarroe, Carson, and Gay Streets. It has a stone church building and a connecting brick rectory and a separate brick school.  The parking lots once had a large brewery. Neighbors and developers have been considering what to do with the complex for years, and American Living Concepts of Manayunk bought the property with a plan to renovate the existing buildings and build apartments next door on the former parking lots.  American Living Concepts has modified their plan to have more townhouses and fewer apartments. The planned development is designed by Campbell Thomas & Company Architects.

The developers want to address neighborhood concerns, such as appropriate amounts of parking, public parking, open space, and preserving the look of the existing buildings.  The new development would have a total of 56 units. There would be 21 townhouses on Carson and Conarroe Streets. Each townhouse will have two parking spaces and a green roof.  The townhouses will be three stories tall and have red brick and metal panel facades. All the apartments will be in the renovated buildings. The church building, with its distinctive steeple, will be renovated into eight rental units, with two one-bedroom units and six two-bedroom units.  The former church rectory will be converted into seven one-bedroom rental units. And the former school building will be renovated into twenty rental units, with eight one-bedroom units and twelve two-bedroom units. Two green spaces, between the buildings, will be converted into parks, one to be known as Church Park and the other to be called Rectory Park.  Another green space, behind the former school, will be preserved and called School Park. Inside the church building will be an exercise room and a meeting room. There will be open parking spaces for residents, and there will be a small public parking lot, for a total of 95 parking spaces in the whole project. The former school building will also have 20 bicycle parking spaces.

Looking to rent or buy in Manayunk? Contact us via email at info@thecondoshops.com and 215.692.6636.