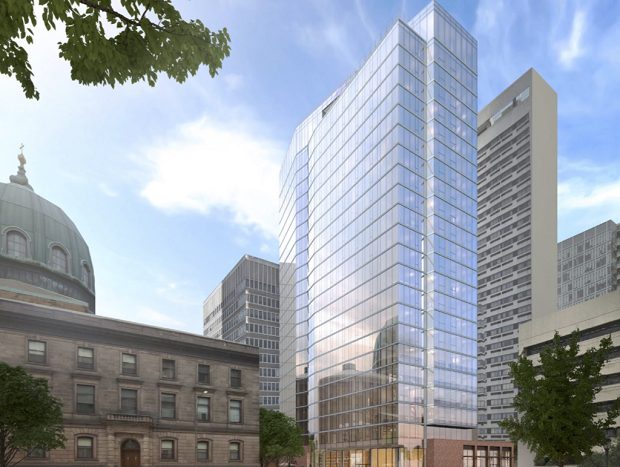 The Archdiocese of Philadelphia is headquartered on the Ben Franklin Parkway, in and around the Cathedral of Saints Peter and Paul on Logan Circle.  The complex includes the Archdiocese office building, a former convent building, and two large parking lots. For years, the Archdiocese has considered selling much of the property surrounding the cathedral for development.  They have recently entered into a plan with Exeter Property Group to start that redevelopment of much of the property around the cathedral. The first phase of the plan will begin construction soon. It will be a high rise apartment building along the Parkway called Cathedral Place.  It is being designed by Solomon, Cordwell, and Buenz.

This new tower will be 23 stories tall and will have 273 luxury rental units.  The first floor will have a large retail space of 3,000 square feet at the corner of 17th and Race Streets.  The lobby and residential entrance will face a landscaped plaza in between the tower and the cathedral. The top floor will have amenities, such as a fitness center, a community room, a yoga room, and an outdoor deck overlooking the Parkway and much of the city skyline.  The exterior of the building will have a glass curtain wall, angled, with some copper trim to mimic the copper dome of the cathedral. The first floor will have brick and a long canopy over the entryway to the lobby. Planters will line Race Street. A sixty-space parking garage will be located underground.  The second phase will include a much taller tower on Vine Street, just to the north.

The redevelopment of the Archdiocese properties is a major step in developing the Vine Street corridor, where several underdeveloped properties remain.  The former Hahnemann Hospital will be available for redevelopment a couple of blocks away. As these sites redevelop, the area around the Parkway will see much new activity and population, making it feel much more like the heart of Center City.  The second phase of the Archdiocese properties redevelopment promises to be a large and tall new addition to the Center City skyline. This is in addition to redevelopment of sites on the north side of the Vine Street Expressway, where The Alexander apartment tower has recently been built, the renovation of the former Glaxo-Smithkline headquarters at 16th and Race Streets into offices and apartments, and the new Comcast Technology Center, next to the Comcast Center on Arch Street.