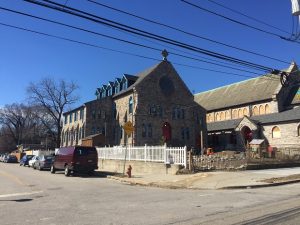 The former St. Peter’s Church of Christ, at 47th Street and Kingsessing Avenue, has been undergoing renovations in recent years, after being saved from years of neglect and possible demolition. The large stone church and parish house had been vacant for decades, and contributed to the decay of the eastern part of the Kingsessing neighborhood. There were plans to demolish the church complex to remove the blight a few years ago, but preservationists and neighborhood residents fought to save and reuse the buildings. Negotiations, which included former Mayor Wilson Goode, began to renovate the buildings with new, often surprising, uses. Two day cares were opened, one in the parish house and another in the large Gothic church. A print studio opened up in the parish house and a comic book company uses part of the bell tower for offices and storage. Now, developers Constellar Corporation and architects Atlantis Architects want to convert the rest of the church building into apartments. They have gotten assistance from Friends of Sacred Places, a non-profit organization that helps to renovate former and current houses of worship.

The developers and architects plan to add a second level, utilizing support from basement posts, inside the former sanctuary to create loft apartment units. The unit bedrooms will line up with the large windows of the former sanctuary. There is 8,800 square feet to be divided into 21 rental units. The entrance to the apartments will be a former sanctuary entrance on 47th Street. The apartments will have no parking spaces, which worries residents on tiny, neighboring Reinhart Street about street parking, even though those neighbors’ homes all have driveways. This neighborhood has several trolley lines running between Center City and Delaware County.

Kingsessing is near the University of the Sciences, on the edge of University City. Projects like 4700 Kingsessing Avenue continue the revitalization of this neighborhood on the northern edge of Southwest Philadelphia, while preserving a nineteenth century neighborhood landmark and providing residential and creative office space.