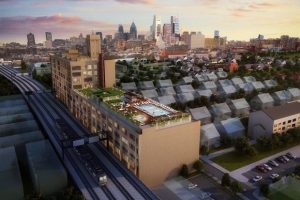 Lower North Philadelphia used to have several large and noteworthy vacant buildings, mostly industrial buildings, but one after another they are being renovated for new uses.  The Divine Lorraine Hotel, the Metropolitan Opera House, the former Stetson Hat Factory (also known as the Umbrella Factory), the Red Bell Brewing Building, the Mulford Building, the Fairmount in Brewerytown, the Independence Press Building, the Goldtex Building, the Heid Building, and the PECO Power Station along the Delaware River waterfront are all being renovated into mostly residential developments.  The very last of these large vacant buildings in Lower North Philadelphia is the former Quaker Chemical Building at 10th and Poplar Streets, next to the SEPTA regional rail line to the Northeast. This building was originally built as a furniture warehouse for Strawbridge and Clothier department store and was converted into a chemical factory by Quaker Chemical Company in the 1970s. It has been vacant for decades and stands out over the Poplar neighborhood, which has been largely rebuilt with high-quality affordable housing.  Now, Post Brothers Apartments (which renovated the Goldtex Building) has bought the Quaker Chemical Building from Philadelphia Suburban Development Corporation and intends to renovate it into apartments.

The Quaker Chemical Building has two wings: one that is ten stories and one that is six stories, closer to Girard Avenue, and the entire building is more than 300,000 square feet.  Post Brothers plans to

convert the whole building into 350 rental units, with about 30 to 40 units reserved for affordable “workforce housing”. It will be a mix of studios, one, and two bedroom units.  The lower floors will have retail and some office or commercial space. The residential amenities will include a fitness center, a theatre, meeting rooms, and a roof deck with a rooftop pool. A 143-space parking garage will be built at 10th and Percy Streets.  Twenty-two additional spaces will be available on a separate lot on Girard Avenue. The building will have 129 bicycle spaces, as well.

The renovation of the Quaker Chemical Building is the latest, and perhaps most significant, development in the Poplar neighborhood, which includes the renovation of the aforementioned Divine Lorraine, the renovation of the former Spring Garden School into housing, the building of the View and View II at Montgomery apartment buildings where the Wanamaker Public School used to be, and soon another huge apartment development next to the Divine Lorraine on Fairmount Avenue.  On the west side of Broad Street is the aforementioned Metropolitan Opera House, 906 North Broad Street apartments, and the 1324 North Broad Street highrise. The Quaker Chemical building was the last large vacant building, visible from many angles, and rather than be an embarrassing blight in the neighborhood it will now be a hub of activity for Poplar.

The data relating to real estate for sale on this website appears in part through the BRIGHT Internet Data Exchange program, a voluntary cooperative exchange of property listing data between licensed real estate brokerage firms in which The Condo Shop participates, and is provided by BRIGHT through a licensing agreement. The information provided by this website is for the personal, non-commercial use of consumers and may not be used for any purpose other than to identify prospective properties consumers may be interested in purchasing. Real estate listings held by brokerage firms other than The Condo Shop are marked with the IDX icon and detailed information about each listing includes the name of the listing broker.
2020 BRIGHT, All Rights Reserved. Information Deemed Reliable But Not Guaranteed. Some properties which appear for sale on this website may no longer be available because they are under contract, have Closed or are no longer being offered for sale.
Data last updated: 5/24/20 5:20 PM PDT