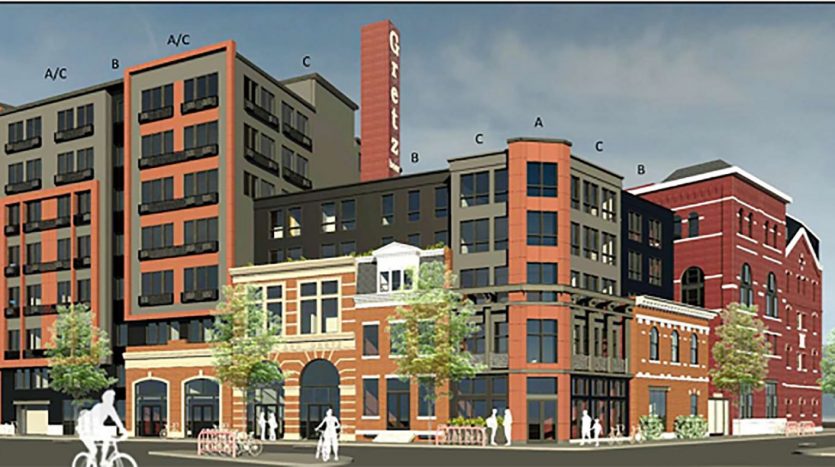 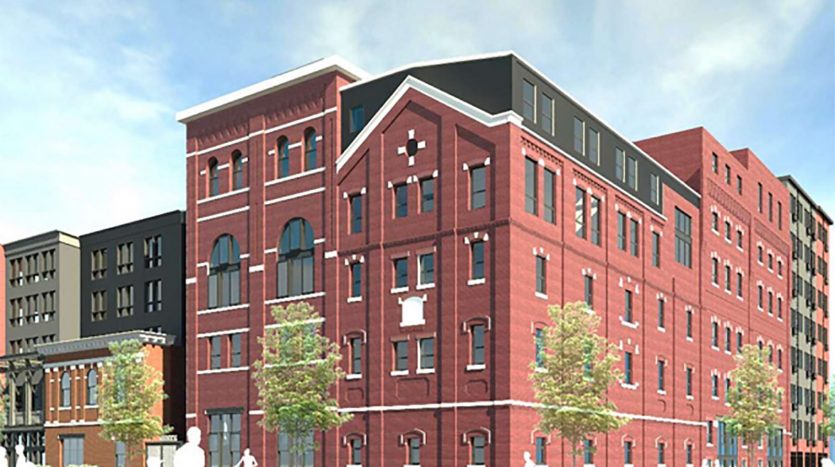 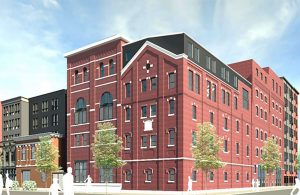 As South Kensington continues to grow and develop, many of the once vacant industrial landmarks of the neighborhood are being redeveloped into residential and office space.  Some noteworthy renovations include the Crane Arts Building and the former Stetson Hat Factory, now known as the Umbrella Factory Lofts. Another long-vacant landmark building is the former Gretz Brewery on Germantown Avenue.  The Gretz Brewery was built in phases around the turn of the twentieth century and has been vacant for decades. It was built in an “industrial Romanesque” style and includes a tall smokestack with the name “Gretz” written on it.  Some of the original building has been torn down in the past. Now, Rufo Contracting and Construction is planning to redevelop the whole site of the brewery, which is between Germantown Avenue, Oxford Street, Lawrence Street, and Redner Street.  This development will renovate the existing buildings of the Gretz Brewery and fill in vacant lots with new buildings. This new development is being designed by T + Associates.

The redevelopment of the Gretz Brewery will have three wings.  Wing A will be on the south side and will be all new construction.  A one-story addition to the brewery will be demolished for Wing A. Wing B will be the renovated brew house and ice house along Lawrence Street on the west side.  Wing C will be on Germantown Avenue and will be mostly new construction, but will include a small part of the old brewery that is a landmark along the avenue. A bridge will connect the brewhouse to the modern buildings.  A landscaped courtyard will be in the middle of the complex. The entire project will have approximately 200 rental units and six first floor commercial retail spaces, especially on Germantown Avenue. The apartment units will mostly be loft-style units.  The second floor will have a fitness center and the roof will have a green roof and roof deck. Parking will be largely underground and will have 44 spaces and 82 bicycle parking spaces.

South Kensington’s revitalization creates economic conditions that encourage the renovation of the neighborhood’s once neglected landmark industrial buildings.  This revitalization includes a mix of new construction and renovation and a mix of housing and commercial development. The renovation of buildings like the Gretz Brewery, Stetson Hat Factory, and the Crane Arts Building preserve Kensington’s industrial heritage while giving the neighborhood a brighter future.