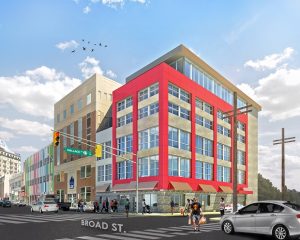 A small, older building at Broad and Wallace Streets will soon be renovated and expanded into a modern apartment complex. This soon-to-be expanded building is located at 655 North Broad Street and is currently a three-story brick building, built in the nineteenth century, with slightly arched windows and Santucci’s Original Square Pizza on the first floor. The renovation will add two more floors and a contemporary façade to the existing building. It is being built by Blake Barabuscio, the owner of Santucci’s, and designed by Scott Woodruff of Design Blendz.

The expanded building will be five stories tall when work is done. The complex will continue to have Santucci’s on the ground floor and eighteen rental units above. Santucci’s will expand to have a catering and event space, for events such as weddings. The breakdown of units will consist of nine one-bedroom units, four studios, and five two-bedroom units. The developers are looking for a diverse mix of tenants, such as students and workers. Parking will be shared with the nearby Local Laborers 332 headquarters next door. The developers recently received a zoning variance from the Zoning Board of Adjustment for lack of parking.

This is just one development in a bustling area along North Broad Street. Just a couple doors to the north, a building once used as a car showroom, and then as a large homeless shelter, is being renovated into office and retail space. Ironically, that building is removing a modern façade to reveal a traditional nineteenth century façade with arched windows. Further north, the historic Divine Lorraine Hotel is being renovated into apartments and a large empty lot behind it, along Ridge Avenue, will be the site of a large new apartment and retail building soon. To the south, new apartment buildings are being built at Broad and Callowhill Streets and the former Inquirer building is about to be renovated soon, as has the former Thaddeus Stevens School into the Mural Lofts apartment building at Broad and Spring Garden Streets.