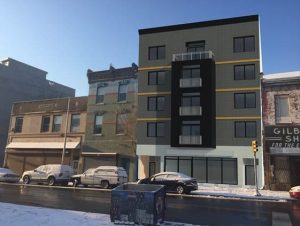 Ridge Avenue runs through the Francisville neighborhood.  For years, it was the main shopping street for Francisville.  In fact, Francisville originally was laid out to correspond to Ridge Avenue, with the neighborhood’s early streets all parallel or perpendicular to Ridge.  Eventually, Ridge Avenue became very depressed and most of the retail businesses closed up. Many buildings were left completely vacant and terribly deteriorated.  As Francisville has seen a development boom in recent years, Ridge Avenue has seen an incredible amount of new construction, along with some renovations. The new developments are all apartment buildings, many four and five stories tall, and they all have retail spaces required by the zoning code. The retail spaces are still mostly vacant, but city officials and planners anticipate increased demand as the neighborhood continues to grow.  A new apartment building is planned at 1648 Ridge Avenue, which currently is a vacant lot. It is being designed by YCH Architects.

1648 Ridge Avenue will have twelve rental units mostly on floors two through four, with one unit on a partial fifth floor.  Most units will be one-bedroom units, but there will be three two-bedroom units. A couple bi-level units will be in the rear at the first floor and basement.  The facade will have gray brick, with bay windows in the front that will also have small terraces. As mentioned, the first floor will have a required retail space.  This retail space will also be on the first floor and in the basement. The building will not have parking for cars, but will have space for bicycle storage. There will be a roof deck on top.

1648 Ridge Avenue continues the steady development that Ridge Avenue, and Francisville, has been seeing recently after decades of decline and abandonment.  This building is part of that trend of taller, modern apartment buildings creating a new future for Ridge Avenue and Francisville. If you’re interested in exploring the market in Francisville, you can reach out to The Condo Shop Keller Williams for more information and assistance. 215.692.6636