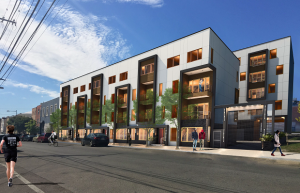 Yet another upscale development of townhomes and apartments is to be built in the fast developing neighborhood of South Kensington, just north of Northern Liberties.  South Kensington has been seeing some of the most residential development in the city, with large residential developments of apartments and townhouses on almost every block just north of Girard Avenue, but less development further up.  Now, High Top Real Estate and Development is building this new project at 1712 North Second Street, further up into South Kensington between Montgomery Avenue and Cecil B. Moore Avenue.  They recently presented their plans to the Planning Commission’s Civic Design Review board.

This new residential development is being designed by PZS Architects.  It will have 56 units, in apartments and duplexes.  The duplexes will be in a four-story building along North Second Street, for a total of twelve duplex units for sale.  Each duplex unit will have two car parking, in garages in the back on little Philip Street.  There will be roof decks on top of the duplex building and large windows and brick on the first floor of the front façade and balconies with wooden accents above.  The back of the duplex building will have Juliet balconies and a trellis to add greenery to the Philip Street side, and maybe planters in between the garages.  The apartments will be in a five-story building on Philip Street, with 44 rental apartment units.  The first floor will have four units, and 26 parking spaces and the lobby, and ten units on each of the four floors above.  The apartment building will have a roof deck on top and maybe a green roof.