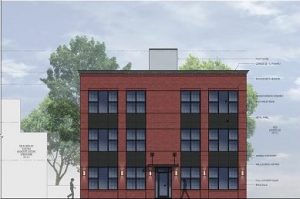 Haverford Avenue, in West Philadelphia’s Mantua neighborhood, used to be a major commercial street, but has lost most of its retail businesses and become desolate over the years.  The stretch of street is littered with vacant buildings and empty lots, but is finally starting to see new apartment development as students move further north of the Drexel campus.  Haverford Avenue is just north of the increasingly-upscale Powelton Village neighborhood, where there is a mix of college students, living in apartments, and middle-class families, living in large Victorian townhomes.  Mantua is starting to seem attractive for student apartments since the redevelopment of the Mantua Hall public housing complex, on North 36th Street, and the development of the Dornsife Center for Community Partnerships, a busy community center at 36th and Spring Garden Streets.

This new apartment complex is replacing three empty lots, next door to a derelict vacant warehouse, which is also due to be replaced by a 21-unit apartment building which may include a retail space.  This particular building will have twelve units on three floors.  It is situated at 3604 Haverford Avenue, across from a largely empty block that city agencies and community groups would like to redevelop with a supermarket.  3604 Haverford Avenue is being developed by Westview Development Partners and designed by Harman Deutsch, who usually focus lower on North Philadelphia.  It will have a traditional brick façade and traditional windows, with metal panels in-between the sets of windows on each floor.  There will be a steel girder marquee over the front entrance, giving the building a bit of an industrial feel.  The street level will have exterior lights along the front façade, adding lighting to a dark stretch of the Avenue.  The twelve-unit building will have eight one bedroom units and four one bedroom, one den units, which could be used as two bedroom units if tenants want to use the den as a bedroom.  The building will have no parking, but will have bicycle storage inside and a rear yard.

The redevelopment of the 3600 block of Haverford Avenue is underway and can serve as a gateway to the Mantua neighborhood.  As previously stated, a new supermarket may soon be built across the street from this new apartment building and some other new construction is happening along Haverford Avenue to the east and west. These developments, along with the redevelopment of Mantua Hall, the renovation of the Mount Vernon Manor apartments, the Dornsife Center, and the reopening of bridges at 40th and 41st Streets over the railroad tracks, are leading to revitalization and an increasing construction boom in Mantua.