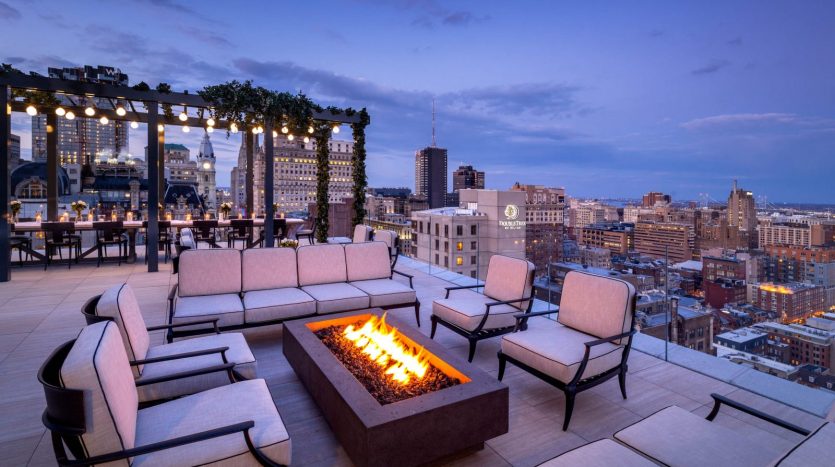 The Avenue of the Arts, in Center City, has several of Philadelphia’s most prominent performing arts venues.  At Broad and Locust Streets are the venerable Academy of Music and Merriam Theatre and at Broad and Spruce Streets are the Kimmel Center and Wilma Theatre.  These venues are at the heart of Philadelphia’s considerable performing arts scene, with institutions like the Philadelphia Orchestra, the Pennsylvania Ballet, the Opera Company of Philadelphia, PhilaDanco, BalletX, and the Philadelphia Chamber Music Society and Chamber Music Orchestra as resident companies within a two-block stretch of South Broad Street in Center City.  The Atlantic Building, at the northwest corner of Broad and Spruce, was built in the 1920s as the headquarters for the Atlantic Petroleum Company, which later merged with the Richfield Oil Company and became known as ARCO and moved to 1601 Market Street in the 1970s. The Atlantic Building is twenty stories tall and covered in white limestone. After several years of vacancy, it has been bought by Post Brothers and is being renovated into an ultra-luxury apartment building that will complement the upscale cultural district that surrounds it on the Avenue of the Arts South.  The interiors for this new luxury apartment community have been designed by Rafael Vinoly, designer of the Kimmel Center across the street. The apartment community will be called simply The Atlantic.

There will be more available units on the upper floors becoming available soon and there will, also, be four bi-level penthouse units at each corner of the top floors. Those units will have Jacuzzis and private terraces behind the decorative cornice.  The penthouses will each have an additional connecting studio apartment available for rent or for penthouse tenants’ relatives. Each unit in the building will have hardwood oak floors, large closets, high ceilings, large washers and dryers, and iPad or Lutron controls.  The kitchens will have Calacatta gold marble quartz countertops, built-in stainless steel ovens, and wide stainless steel refrigerators. The penthouses will have Bertazzoni kitchens, with the Bertazzoni brand stainless steel refrigerators, ovens, and cooktops, and Blanco sinks, Delta faucets, Summit wine chillers, and stainless steel coffee makers.  Each unit in the building will have travertine porcelain walls, rain shower heads, and lighted make up mirrors in the bathrooms.

The Atlantic has some of the best residential amenities in Philadelphia.  There is an expansive fitness center, with a biowall, a yoga studio with classes, and Peloton bikes.  There are a spa and saunas, a resident lounge with demonstration kitchen, a media lounge, a coworking space and conference room, and a sizeable play room for children and children’s reading room.  The rooftop has a heated infinity pool, a hot tub, a dog run, a children’s play area, and a rooftop lounge with grills. The rooftop amenities all have stunning expansive views of Center City and South Philadelphia.  The first floor will have a large four-star restaurant called Steak 48, which will have a 300-person dining room and a smaller, separate casual dining space, both on Broad Street. Steak 48 will offer room service to the building’s tenants.  A small cafe will be located on Spruce Street, across the street from the Kimmel Center and Volver restaurant.

The Atlantic is an important addition to the Avenue of the Arts.  It is a dramatic adaptive reuse of a landmark historic office building and provides new luxury housing and active retail in the heart of Philadelphia’s premier concentration of performing arts.  It encourages new upscale development along South Broad Street, which is already happening, or being planned, on once blighted and underused properties just to the south. The Atlantic is a premier community in the heart of Center City and the Avenue of the Arts.