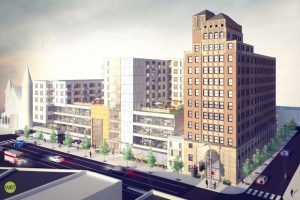 The Beury Building is a former highrise office building at Broad Street, Erie and Germantown Avenues, which was built in 1926 as the headquarters of the National Bank of North Philadelphia and designed by architects Airdrie Watts. It was named after Charles Beury, the bank’s first president, and one of the presidents of Temple University, and it sits just north of the rapidly developing Temple Hospital complex. The Art Deco highrise became a National Historic Landmark in 1985, but has been vacant since 1984. Like much of industrial North Philadelphia, which once formed the basis of the National Bank of North Philadelphia’s client base, the conspicuous tower had fallen on hard times and became a “landmark of blight”, with broken out windows, graffiti up to the top floor, and boarded up retail windows and entrances on the first floor. It had become the ultimate symbol of upper North Philadelphia’s economic decline, surrounded by a busy but still struggling and dilapidated business district, much like the long-blighted Divine Lorraine Hotel on lower North Broad Street had become a symbol of lower North Philadelphia’s economic decline.

Now, developers Shift Capital, in partnership with the Bethesda Project and Philadelphia Health Management Corporation, plan to renovate the entire building and eventually redevelop the entire 3700 block of North Broad Street. The renovated Beury Building would be renamed The Beury Beacon, because the developers envision it as a beacon of revitalization and community activity for North Broad and upper North Philadelphia. The developers, and their partners, are planning to renovate floors four through eleven into eighty rental apartment units, with thirty being market rate rentals and fifty being reserved as affordable units. Each unit will be 624 square feet and have one bedroom. Floors one through three will be a neighborhood health center of about 20,000 square feet, and could have a retail space in the future. The developers would like to develop an extension for the entire 3700 block of North Broad, in a second phase, which would include eighty more apartments, 10,000 square feet of retail space, and 100,000 square feet of additional commercial space. The developers are, also, partnering with the Chester County Economic Development Council to remediate asbestos and settle outstanding tax liens. The project is supported by the Nicetown Community Development Corporation and the Nicetown-Tioga Improvement Team. Kitchen and Associates is the architectural firm designing the renovation and eventual extension. The developers hope to start remediation this month and start the renovation, in earnest, in September of this year.
The renovation of the Beury Building continues a string of high-profile renovations of vacant, blighted landmarks on North Broad Street, which taken together is like a dream come true for revitalizing North Broad and North Philadelphia. As mentioned earlier, the once-vacant and blighted Divine Lorraine Hotel, at Broad; Ridge; and Fairmount, had become a symbol of economic decline for lower North Philadelphia, but now is almost done being renovated into apartments (even the iconic neon sign on top has been renovated and relit). A couple blocks up, the long-vacant Metropolitan Opera House is close to being renovated into a banquet hall by the same developers of the Divine Lorraine, nearby the former Inquirer Building is close to being renovated into a hotel, and at Broad and Arch, the former Liberty Title and Trust Building is being renovated into another hotel. Just north of Temple University, the long-vacant Uptown Theatre has been partially renovated, as well. All at once, North Broad Street’s several “landmarks of blight” are being renovated and creating an entirely new, positive image of North Broad, and ultimately, North Philadelphia. The renovation of the Beury Building signals that the upper section of North Broad and North Philadelphia is part of this revitalization and the surrounding Nicetown-Tioga neighborhood is about to become a prime area for real estate investment and development, particularly for student housing.