The Dramatic Addition at 15th and Chestnut Streets, W/Element Hotel 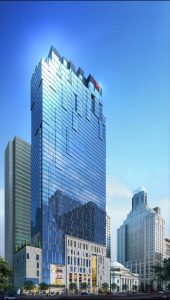 Plans for the extraordinary “W/Element Hotel” tower, which will be at 15th and Chestnut Streets, were discussed by the Center City Residents Association board at their September meeting.  The presentation was made by Jeff Cohen, of Vine Street/Matthews Developers, and David Ertz, of Cope Linder Architects.  The tower is a by-right project, which means that the developers do not need a variance from the Zoning Board or approval from the Planning Commission, but the developers wanted to present to the CCRA board anyway.

The tower will be in the heart of Center City and will be 51 stories and 582 feet tall, right next to the Residences at the Ritz.  There will be 755 hotel rooms, with the top half will have the W Hotel and the lower half will have the Element Hotel portion.  The architects designed the building to “relate to Chestnut Street”.  One element (no pun) of that attempt to relate to the street is to make sure the base is the same height as the “colonnade height” of the base of buildings on Chestnut and Broad Streets.  The base will be seven stories and almost 100 feet tall and it will be partially covered in limestone and will be partially glazed.  The parking will all be on three levels, all underground.  There will be 1,700 square feet of retail space at the corner and two separate entrances, and lobbies, for each hotel brand.  The windows of the base will be subdivided to resemble the city grid.  The tiles on the floor will have a similar pattern that will resemble the city grid.  W Hotels like to design their buildings to be unique in each city and to reflect aspects of that city, rather than have a uniform brand design.

The tower will have a lot of glass to have a “dancing, shimmer” look.  There will be strips of LED lights embedded in the tower’s facade, and they

will change color and have a cascading effect at times.  The top will have an irregular façade, with bays and terraces, meant to resemble the cliffs along the Schuylkill River in Fairmount Park.  The top floors will have the most expensive penthouse rooms for the W.  The tower will be setback 32 feet from 15th Street and will be placed far enough to the east to allow a glimpse of the City Hall Tower and the new Dilworth Park from the eastern edge, in between the Ritz Carlton Hotel and the Residences at the Ritz.  The setback allows for a terrace at 15th and Chestnut Streets which will have a pool, a bar, and a garden overlooking the busy intersection.  The W Hotel lobby will have a public room and a bar and clubroom.

This project will be a dramatic addition to the Avenue of the Arts.  It is between two older buildings being renovated into luxury apartments at 15th and Chestnut and Broad and Chestnut and up the street, and around the corner, from the new SLS Hotel and Condo tower and the soon-to-be-renovated Atlantic Building, both at Broad and Spruce Streets.  Adding so many new tourists, in largely luxury accommodations, at this site and in a dramatic addition to the skyline will have a very positive effect on the area and on Chestnut Street, in particular.

The Aria, Luxury Living In The Heart of Philadelphia
Observation deck for One Liberty Place?