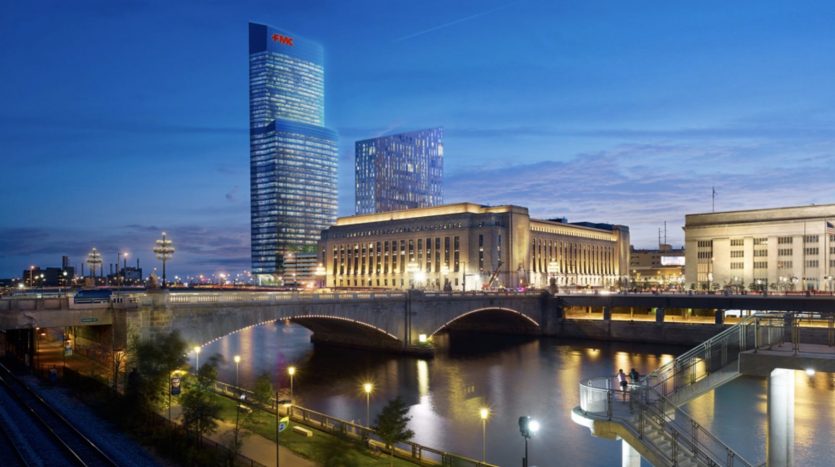 The former post office annex, between Chestnut and Walnut Streets along the University City waterfront, was a plain building that was demolished more than a decade ago.  In its place has been built two landmark towers, with a large parking garage in between them, known as Cira Centre South. Cira Centre South was developed by owner Brandywine Realty Trust and designed by Cesar Pelli Architects and BLT Architects.  The residential tower on Chestnut Street is known as evo, and was designed to appeal to graduate students. The parking garage has a convenience store and an arcade along 30th Street and a beautiful park and cafe on top with sweeping views of Center City and the Schuylkill River.  The tower on Walnut Street is the most recent addition to the complex and it is a 50 story curved tower, that lights up brightly at night. This tower has the NASDAQ-owned Philadelphia Stock Exchange and the headquarters of FMC Corporation on the lower floors and is known as the FMC Tower as a result.  The first floor has the lobby for FMC and an upscale restaurant called Walnut Cafe, at the corner of 30th and Walnut. The upper floors have apartments managed by AKA University City. AKA University City has a mix of extended stay units and full year lease units, along with many amenities.

AKA University City at Cira Centre South has 265 luxury rental units.  Of those units, 130 of them are extended stay units with leases that last six months; one month; or even less, and 135 of the units offer full year leases.  The extended stay units are on floors 29 to 36 and the full year lease units are on floors 37 to 46, with some penthouse units. The units are one and two bedroom units.  The one-bedroom units are approximately 750 square feet and available two bedroom units are approximately 1,100 square feet and rent for $2,500 to $6,000 per month, depending on the floor and unit features.  Most units have GE oven/stoves; microwaves; and dishwashers, Samsung refrigerators, quartz countertops, quartz vanities, Duravit bathroom sinks, Grohe bathroom faucets, Grohe rain shower heads in shower stalls, and Bosch washer/dryers.  The penthouses have Bosch oven/stoves and microwaves, built-in Liebherr refrigerators that resemble kitchen cabinets, marble backsplashes and marble bathroom tiles, and bathtubs. The 28th floor has plenty of amenities, including a lounge, a terrace with fire pits and skyline views, a Technogym fitness center and yoga room, a 72 foot swimming pool, a private screening room, and a 3-D indoor golf simulator.  The amenities floor, also, has a business center with printing services, wifi, a conference room, a catering kitchen, and a boardroom.

The new FMC Tower adds a dramatic landmark for the Philadelphia skyline and especially University City.  AKA University City brings necessary extended stay housing to an important nexus of business and academia.  Adding this much new residential housing to this part of University City helps create a neighborhood with incredible commuter access, since 30th Station and stations for the Market/Frankford line and trolleys are all a block away.  Residents of AKA University City at the FMC Tower in Cira Center South have the expansive Penn Park across Walnut Street and retail downstairs and at 30th Street Station. The Schuylkill River trail and Center City neighborhoods like Rittenhouse Square and cultural districts like the Ben Franklin Parkway are all right across the river.  Nearby, Brandywine is developing the new Schuylkill Yards towers behind 30th Street Station. The FMC Tower is a major milestone in the developing University City waterfront neighborhood and business district.

25 Ways to Carve out a Bedroom in Your Studio Apartment
Another New Apartment Building Planned for North Broad Street, North of the Temple Campus