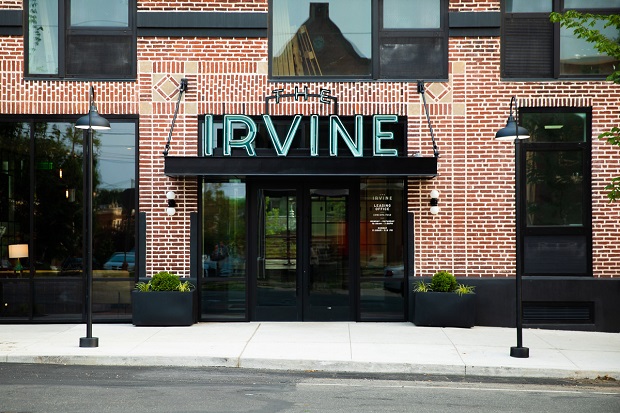 West Philadelphia’s 52nd Street is considered “West Philadelphia’s Main Street” and has been seeing some new development in recent years that is beginning to revitalize the important commercial stretch after many years of decline.  Several neighborhoods are divided from each other because of 52nd Street, including Cobbs Creek to the west and Cedar Park to the east, around Baltimore Avenue. Just south of Baltimore Avenue is a regional rail line and a former industrial area that was created surrounding that rail line, when it was used for freight trains a hundred years ago.  This industrial area is largely vacant now and includes a large seven-story warehouse building at 780 South 52nd Street, most recently used by Apple Storage but vacant for many years. The former Apple Storage warehouse has been converted into luxury apartments by Post Brothers. The new apartment community is named The Irvine.

The Irvine has 153 upscale rental units.  The units are a mix of studios, one-bedroom apartments, two-bedroom units, and three-bedroom apartments.  The apartments include bi-level terrace units and town home style units, which are loft-style bi-level apartments.  The studios come in four sizes: 430, 490, 580, and 650 square feet. The rents for studios range from $1,295 to $1,595 per month.  The one-bedroom units are 690 to 1,110 square feet and rent for $1,575 to $1,795 per month. The available two-bedroom units are 1,090 to 1,120 square feet and rent for $1,995 to $2,265.  The three-bedroom units are 1,340 square feet and none are available right now. The units have hardwood floors, floor to ceiling windows, dark stainless steel Frigidaire kitchen appliances, Blomberg washers and dryers, quartz kitchen countertops and quartz vanities in some units, rain-style stand up showers, and Pfister kitchen and bathroom faucets.  Some small studios have IKEA closets. Studios have wall heating and air conditioning units, but one-bedroom units and larger have central heating and air conditioning units. The first floor has a small lounge in the lobby, Amazon lockers, Tide Cleaner dry cleaning lockers, an outside dog run, and another small lounge near the elevators. The lower level has an indoor lounge with a full kitchen, a co-working space with a printer/scanner/fax machine, a TV, a large table, sofas and chairs, and a poker table.  Outside is a community garden and a patio with two fire pits surrounded by wicker chairs, a hardwood table, four grills, and free wi-fi. The lower level also has a fitness center with Peloton bikes; Crossfit training equipment; and yoga studios, a bicycle storage room, and access to a surface parking lot with 68 parking spaces. The hallway walls have original graffiti. The exterior still has some of the old Apple Storage signage, and new neon signs for The Irvine have been added on top and over the front entrance marquee.  New tenants who sign leases now receive free motor scooters and second month rent for free. Military personnel get 5% off monthly rent and tenants can get a $1,000 referral fee for referring other new tenants.

The Irvine will have a profound impact on the 52nd Street corridor, bringing many new residents and consumers for the commercial corridor’s businesses.  It will have a similar effect on Baltimore Avenue, which until recently had a lot of vacancy on the adjacent blocks. It is likely

that new development will occur on many of the remaining industrial sites, some of which is already happening a bit to the south along the regional rail line.  New retail businesses will likely open on 52nd Street and Baltimore Avenue soon, similar to the many stores and restaurants to the east on Baltimore Avenue. The Irvine is an important step in West Philadelphia’s revitalization.

5 Home Design Errors First Time Home Buyers Overlook
What $20,000 a Month Rent Will Get You in Philadelphia