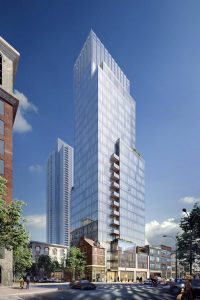 Jewelers Row, at Eighth and Sansom Streets, is one of Philadelphia’s most noteworthy and iconic shopping districts.  Dating back to the nineteenth century, it is the nation’s oldest, and second largest, jewelry district. The heart of Jewelers Row is along the 800 block of Sansom Street, with dozens of thin buildings that have a store on the first floor and jewelry production and storage spaces above the first floor.  Despite its historic popularity, Jewelers Row was never officially declared an historic district, which would have prevented demolition of existing buildings. Luxury developer Toll Brothers, based in suburban Philadelphia, plans to demolish five smaller buildings from 702 to 710 Sansom Street and build a new luxury condo tower.  Toll Brothers received approval from the Philadelphia Historic Commission to demolish the buildings so that they can build their new tower.

The new tower would be called “Toll Washington Square”, since it would be visible from the park around the corner.  It will be 24 stories, and 292 feet, tall and will have 85 units for sale. The first floor will have 4,500 square feet of retail space on Sansom Street, with a modern glass facade.  It’s not certain at this time whether any of that retail would be rented out to jewelry stores. The tower will be all glass, with terraced setbacks causing a cascading effect on the various sides and levels.  The terraces are designed to correspond to neighboring buildings. There will be balconies at the corners and a faceted “crown” on top. The faceted crown is meant as an homage to the gemcraft of Jewelers Row. The building will have 30 bicycle parking spaces, but no parking spaces for cars.  Toll Brothers plans to have a valet service with an existing parking garage at Seventh and Market Streets nearby.

Center City, east of Broad, has been experiencing much new development in recent years.  Near Jewelers Row, an ultra-luxury condo tower has been built at 500 Walnut Street and new residential towers and retail are being built at 12th and Market Streets.  Toll Washington Square is another luxury offering in an increasingly upscale part of Center City.

Please call 215.692.6636 or email info@thecondoshops.com for more information about luxury accommodations or any other real estate inquires you may have.

The data relating to real estate for sale on this website appears in part through the BRIGHT Internet Data Exchange program, a voluntary cooperative exchange of property listing data between licensed real estate brokerage firms in which The Condo Shop participates, and is provided by BRIGHT through a licensing agreement. The information provided by this website is for the personal, non-commercial use of consumers and may not be used for any purpose other than to identify prospective properties consumers may be interested in purchasing. Real estate listings held by brokerage firms other than The Condo Shop are marked with the IDX icon and detailed information about each listing includes the name of the listing broker.
2020 BRIGHT, All Rights Reserved. Information Deemed Reliable But Not Guaranteed. Some properties which appear for sale on this website may no longer be available because they are under contract, have Closed or are no longer being offered for sale.
Data last updated: 5/24/20 5:20 PM PDT