“Town Center” at the Long Vacant Corner of Broad and Washington? 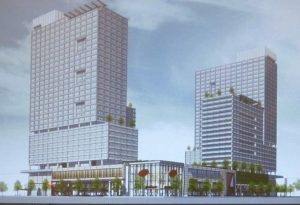 It’s really go big to go home for Bart Blatstein at the long-vacant lot on the NE corner of Broad and Washington Ave. With the presentation last night in Hawthorne, it’s clear that Bart’s goin’ mega-big, especially as his unlikely his casino project will make the cut. Blatstein’s plan is to create a “town center” type development packed with (eventually) two residential towers filled with between 500-800 units each, a huge amenity deck, multi-story retail experiences and even a grocery store. If all goes well, Blatstein envisions a start date sometime before or around “June 2015.” But did he land Wegman’s?

No. Blatstein was prodded during the Q/A session about a lot of things, mainlyparking and density, but he did address the Wegman’s sized elephant in the room: There will be no Wegman’s at this development, even though he “begged” them to come.

Ah, now that that’s out of the way, let’s get on to the meat and potatoes of the project. Beyer Blinder Belle is the team behind the design, which features a complex 4-story retail component, an amenity deck on top of that and two residential towers. Long strips of retail with varying facades will front both South Broad Street and Washington Avenue. There will also be interior retail, mainly the grocery store that’s set back within the complex and also a space for a large retailer on the third floor, which would have its own dedicated parking lot on the third floor as well (think SuperFresh at the Piazza). Blatstein envisionsmultiple restaurant spaces, a bike shop and possible a day spa to be part of the retail mix.

As for the residential element, it would rise “20- to 28- stories” above the 4-story retail aspect and be completed in two phases. The first tower would rise on the NW corner of the lot at Broad and Carpenter Street. The second would be at the corner of 13th and Washington Avenue. Blatstein said the market will determine the final numbers, but each tower would hold a minimum of 500 and a maximum of 800 units. So you’re looking at 1,000 to 1,600 units in this puppy because, math. The mix would be 75% studio and 1-bedroom and 25% 2-bedroom units ranging from the “mid to low teens” per month. But where will all of these new people park?

Well, for starters, there are 710 parking spots included in this project. They will all be housed within the building and be unseen from the street. Secondly, Blatstein hailed the project as a “transit oriented development” and pointed to its proximity to the Broad Street Line, several bus routes and bike lanes. Blatstein mentioned numerous times that car ownership is down, SEPTA ridership is up and they’ll be marketing to a demographic that takes alternative forms of transportation (read: Navy Yard employees and Center City-bound Millenials).

If all else fails and this becomes a car-heavy development, Blatstein pointed to the smaller vacant lot across the 13th Street as a potential overflow lot. He seemed doubtful that he’d need it, “I believe that parking is a non issue.”

Now to the fun stuff. Blatstein dished a little on the amenities to the resident-only terrace/deck space. A walking track will ring the perimeter of the deck. There will also be a pool area and private dog park, which means the apartments will be pet-friendly. It also looks like there is a green space element included on the deck.

Read the full article at Curbed.

Are New Windows Worth Installing This Winter?
How to Make Your Holiday Guests Comfy