Village Square on Haverford Will Transform the Mantua Neighborhood 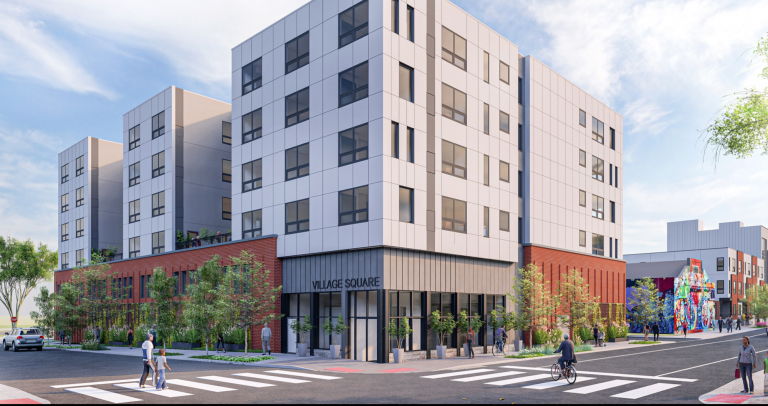 Mantua is a neighborhood north of University City and next to Fairmount Park and the Philadelphia Zoo.  It has seen much population and job loss since its industrial heyday along the railroad line that separates the neighborhood.  Redevelopment has been occurring with the Mantua Civic Association; in accordance with their “We Are Mantua” neighborhood plan, the Philadelphia Housing Authority; which has rebuilt the Mantua Hall highrise housing project into low-rise townhouses and duplexes called Mantua Square, and the Mount Vernon Manor Community Development Corporation; which has renovated the once-derelict Mount Vernon Manor garden apartments.  One conspicuous group of vacant properties is located between 36th and 37th Streets and Haverford Avenue and Wallace Streets. These blocks have been almost entirely vacant for a long time. Plans have been in the works by the community groups to redevelop these blocks with a supermarket and apartments for a decade, and now Lomax Real Estate Partners is partnering with the Mount Vernon Community Development Corporation with a plan to build what the community has been wanting to see at this site for many years called Village Square on Haverford.  This new plan is being designed by Wallace, Roberts, and Todd.

Village Square on Haverford will consist of several buildings.  The largest building will be six stories and will have 72 rental units and a large 21,000-square foot supermarket on the first and second floors.  The supermarket will be a franchise of Fresh Market and will have a mezzanine level with seating for in-store dining. The residential levels will have indentation alcoves along the facade and terraces.  The units will be studios, one-bedroom units, and two-bedroom apartments ranging in size from 513 square feet to 1,000 square feet. The entrance of the supermarket will be at 37th and Mt. Vernon Streets, across the street from a large surface parking lot on 37th Street between Mt. Vernon and Wallace Streets, and the residential entrance will be at 37th and Haverford.  The next phase will have a four-story building at 36th and Haverford, which will be the home for WURD Radio. That building will have a retail space at the corner for a locally-owned cafe. Next to that building will be two three-story buildings that will each have twenty housing units, a mix of studios and two-bedroom units. One building will face Haverford Avenue and the other will face Mt. Vernon Street, and a landscaped walkway will be in between those two buildings.  Eventually, townhouses will be built along Wallace Street. In total, the project should have 32 affordable rental units, 18 for sale workforce housing units, and 116 market rate rental units. The exterior of the buildings will have red brick and metal panels, and the site will be landscaped with trees, shrubs, and ornamental grasses. The project is required to use 1% of the budget for art, and the developers plan to select works of art on the grounds and a wall on Haverford Avenue with a frame space for rotating art installations.  An existing artist’s studio will remain on Haverford Avenue, in the middle of the new project.

Mantua has been coming a long way over the years.  New and renovated housing, the Dornsife Center for Community Partnerships, and now a new supermarket are developing the neighborhood.  Village Square at Haverford is an important step in the neighborhood’s revitalization and provides necessary new housing and retail. Haverford Avenue is experiencing new smaller developments, with new apartment buildings recently built across the street from the future Village Square and on neighboring blocks.  It is likely that other such developments will now fill up the remaining vacant sites surrounding this new development, which will help transform the Mantua neighborhood in the new decade.

New Mixed-Use Apartment and Townhouse Development Being Built at 2nd and Oxford Streets
When Is The Best Time To Buy A Home?