Walnut Estates Is Coming to 22nd and Walnut Streets 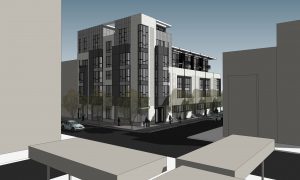 The Zoning Board of Adjustment, at a hearing on November 5, unanimously approved a new condo and retail development at 22nd and Walnut Streets, where there is currently a small parking lot.  The new development will have nine luxury condo units and will be called Walnut Estates.

At the meeting, attorney Hercules Grigos detailed the plan by developer Noah Ostroff and designed by Shimi Zakin of Atrium Design Group.  The building will be five stories tall and the nine units will be above an 1,800 square foot retail space along busy Walnut Street.  Mr. Grigos described this area as where “Center City and University City are starting to come together”.  He said that the developer is looking to lease the space to a “signature restaurant”.  Five townhouses of approximately 4,000 square feet will be built behind the condo building along 22nd Street.  They are being built “by right” and so they are not part of the variance hearing in front of the Zoning Board.  The developer is seeking to change the site’s zoning from all residential, which is currently RMX3, to a mixed-use zoning to allow for the retail space.

The condos will range in size from 500 square feet to 1,230 square feet and will be one, two, and three bedroom units.  The basements will have

storage space, including storage for bicycles.  The developer does not intend to include parking for the condos, although the townhouses will have two-car garages.  The developers are, also, seeking a variance for the lack of parking in the condo building.  Mr. Grigos pointed out that there are approximately 1,900 parking spaces in the surrounding blocks.  Mr. Ostroff said that he plans to find spaces for the existing parking lot’s car share spaces.

The construction of this building would add a connection between Center City and University City.  It could lead to the development of other sites nearby, such as the large gas station at the same intersection, the Rite Aid site at 23rd and Walnut, and 1911 Walnut Street.