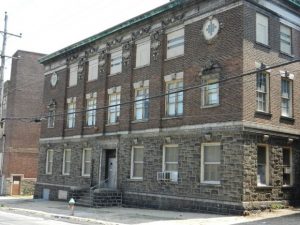 Wayne Junction is a historically industrial area surrounding a busy train station in the Nicetown section of Philadelphia, between the Temple University Medical complex’s neighborhood and Germantown. The Wayne Junction train station was recently renovated and has five regional rail lines passing through it. It is surrounded by industrial buildings dating from the nineteenth and twentieth centuries. Now, developer Weinstein Properties and Philly Office Retail are planning to renovate two large industrial buildings, the Max Levy Autograph Building and the Cunningham Piano Factory.

The Max Levy Autograph Building, at 212 Roberts Avenue, was built in 1902 and was the first building in the United States to use reinforced concrete. It was home to Max Levy Autograph, a printing company which revolutionized printing with the Levytype method. This brick building will have 32 rental units, ranging in price from $625 to $1,100 per month. The units will be studios, one, and two-bedroom units. The first floor would have some of the apartments and storage space and the second floor would have loft-style office space, probably for creative companies. A parking lot on nearby Berkley Street will have forty spaces for the building.

The Cunningham Piano Factory is at 5423 Germantown Avenue. It manufactured pianos for generations until recently. Cunningham Pianos were sold on nearby Germantown Avenue until just recently, as the company decided to move their showroom to another location. The currently vacant piano factory building will be converted into sixteen rental units and 21,000 square feet of loft-style office space on the first floor. The apartments will include eight one-bedroom units, six two-bedroom units, and two three-bedroom units. The first floor would have some apartments in the rear of the first floor, with a rear yard behind them. There will be thirteen parking spaces for the building in nearby lots.

Wayne Junction was just declared an historic district by the Philadelphia Historical Commission. It has several historic industrial buildings, many of which were used to develop new technology and industrial processes. Some of these industrial buildings are still being used for industry, but many are now vacant. Wayne Junction is now being reborn as a residential and creative district, similar to Manayunk and Northern Liberties.

Interested in learning more about the neighborhood, call 215.692.6636 or email info@thecondoshops.com.