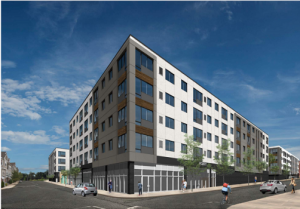 Westrum Development has been developing the formerly industrial area surrounding 31st Street, in the western end of Brewerytown next to Fairmount Park, for years now.  About ten years ago, they started building a complex of stacked townhomes called Brewerytown Square.  Then, they built a small shopping center, at 31st Street and Girard Avenue, which has a small supermarket and now a liquor store.  Then, in the last three years, they have been building apartments along Thompson Street, on either side of 31st Street, called Brewerytown31.  As if that new construction isn’t enough, they have started renovating the former Pyramid Electrical Supply warehouse at 31st Street and Glenwood Avenue, a large vacant warehouse visible from the passing regional rail line, into apartments.  Now, Westrum plans to develop a large vacant lot along 31st Street, imbetween the original Brewerytown Square and the vacant former Red Bell Brewery building, which is just south of the Pyramid Electrical Supply warehouse.

This new development will be rental apartments and will consist of three buildings.  Building One, as designated by the developers, will be four stories and will have 39 units.  It will have parking on the first level for about twenty cars.  Building Two will be five stories and will have 84 units and 6,000 square feet of retail.  Building Two will be at the corner of 31st and Master Streets and the retail will take up the entire first floor, all along 31st and Master Streets.  Building Three will be north of building Two, at the corner of 31st and Jefferson Streets, and will be five stories with 78 rental units.  Outside will be a pool and a courtyard with a dog run.  Much of the space between the buildings will be surface parking for 201 cars.  There will be a bicycle corral at 31st and Master.  The exterior of the buildings will have metal panels and black brick on the first floor and stucco and wood accents on upper floors.  The developers plan to build Building Two first, then Building Three and finally Building One.  All the outdoor amenities will be built with Building Two.

This next phase of Westrum’s Brewerytown developments will fill in a gap along 31st Street that has separated development on Glenwood Avenue from development near Girard Avenue for a long time.  This new development, therefore, will create a seamless stretch of new residential development along 31st Street.  Cater corner from this site is The Fairmount, a renovated factory with retail, as well.  Further up on Glenwood Avenue, a former warehouse has been converted into the Eastern Lofts apartments and next door a former warehouse is being converted into a charter school.  This new Westrum phase helps connect this developing area with the burgeoning Girard Avenue corridor.